There is grief circling mind, like a ring of wildfire, it surrounds every thought. Not letting anything in, nor out. I push the memories back because they remind me, and reminciscing leads to tears and crying hurts. I woke up with a blistering headache, piercing through my head as if it was a spear of glowing lead, an evil reminder of the night before.

The 16th of May when we said goodbye to our family-member and my best mate, an era ended. We got almost 16 years together, Snaps and I, my stubborn little Dachshund.

He left us in peace with the whole family united, sitting around him in the living-room. A room for the living, now a room for the dead. He is now gone, and I am left bewildered because at the same time as I’ve always known I would out-live him, I thought he would live forever, here with me.

I don’t know life without him. He is in my first memories, or rather, he is my first memories. I was six years old when we received him and the month leading up to his arrival was, and still is, the longest month in my life, and that longing is my first memory. I had never before felt so strongly for something and then he came and he came in like a whirlwind; barking so much the neighbours sent threat-letters about calling the police if we didn’t make him shut up, talking whenever we cuddled, running away into the forest barking after some rabbit only to wake up the whole neighbourhood, running away only to stand outside the house of a bitch – crying for her attention.

I still feel his body in my arms, I know every part as if it were my own, his every sound and what it meant, I always said he was my heart outside my body and now it’s been chopped off. It hurts.

I am missing you pal. May you forever be as vivid and alive as you were, and as you are in my mind right now. 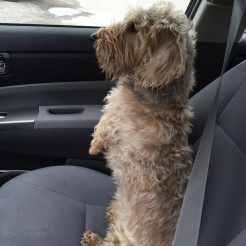